A feast of dance awaiting excited guests, the jiutamai dance form is the high point of the zashiki style banquet. 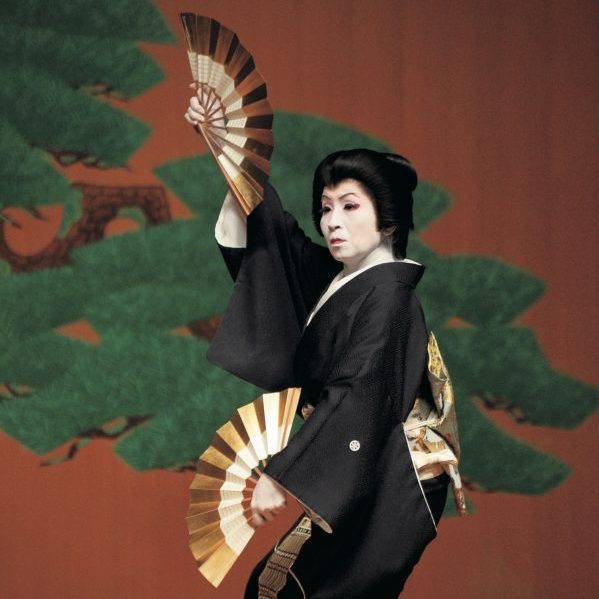 Jiutamai dance was cultivated through the indulgence of wealthy merchants, as described in “The Makioka Sisters” by the famed Japanese writer Junichiro Tanizaki.

The space of a single tatami straw mat suffices to dance the zashiki style. A procession of colors transforms with each dance number, as each dancer blooms, and evokes the opening of blossoms in the viewer’s heart.

The Yamamura school was founded over 200 years ago during the Edo period in Osaka, and is the oldest style of the four types of kamigatamai dance with a focus primarily on jiutamai dance. The jiutamai dance form was cultivated through the indulgence of wealthy merchants, and served as the entertainment at their zashiki style banquets, accompanied by performances of popular songs from the time, called jiuta, or local songs. The art form is a crystallization of the various traditions comprising Japanese dance, such as shinto and court music, noh and kabuki.

Among the many styles, the Yamamura school is considered “first in elegance”. As a “well-mannered dance form”, it was used as part of the domestic training of the daughters of wealthy merchants to prepare them as future wives. In the famous work “The Makioka Sisters” by Japanese writer Junichiro Tanizaki, there is a scene where the main character Taeko, fourth daugher of a cotton wholesaler from the Senba district, performs “Yuki”, a dance of the Yamamura-school.

Graceful and elegant, the stately zashiki style does not disturb the stilled air. Here there is dignified and unwavering kata, or form, and refined gestures. This is the essence of Japanese beauty, depicting the intrinsic harmony of all nature.

The repertoire is chosen to communicate the charms of jiutamai dance for the enjoyment of the audience and to match the mood of the occasion. At times even otokomai, or masculine dances, are performed with the wielding of pole swords.

“Fortitude is needed. One must fully focus and let go of their ego”.

But the result is beautiful from any angle. That is the essence of the jiutamai dance of the Yamamura school.

There is but one form. If that form is perfected, then it becomes possible to dance freely and imbue it with color.

“One dances with the fluency of flowing water.” That is the “lesson of water” in the Yamamura school.

Yamamura explains, “No matter how long one watches the flowing of a river or the waves of the sea, one never loses interest, yes? There is a kind of gentleness in the endless fascination of natural things. This is my ideal.” And the gestures from which all excess has been removed represent the ancient aesthetic of the Japanese people.

“It is the same as the tea ceremony. It is spatial art form.”

From Nara, the birthplace of Japanese culture, to the world, she desires to introduce the world to the charms of jiutamai dance

Yamamura performed at the Japan Culture Festival  in France held in 1997. “I wondered, can foreigners possibly understand this?” Her concerns were entirely unfounded. Her dance received impassioned attention and accolades, and she was invited back twice.

For the first time, she experienced the sensation of dancing as an embodiment of Japan even as she danced as an individual. She was filled to the core of her being with gratitude for being born Japanese as she danced the aesthetics and spirit of her home.

And today, from Nara, she wishes to spread jiutamai dance throughout the world. The ancient city of Nara is the birthplace and cradle of Japanese culture. From here she wishes to once more share her culture of dance, to promote jiutamai dance, pass it on to the next generation, and spread it from Nara to the world.

But this wish is informed by an even more compelling and passionate drive.

“I am never satisfied.”

Whether viewing a painting or listening to music, she experiences life through the frame of dance. This is true now and will always be true. Her desire to improve is without end. She dances today, and will dance tomorrow, driven by this, her essential nature. “I am not there yet, it is just the beginning. Beautifully, like flowing water”, she will continue to dance. 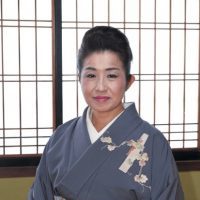 Wakame Yamamura was born in 1960. She has rehearsal studios in Nara, Osaka, and Tokyo, and manages six different dance groups. She performs devotional dances at numerous shrines and temples, and actively participates in many dance events. She also puts effort into training young dancers, and her own daughter, Wakamizuki , joined the Yamamura school at the age of two to become a rising star of hope for the next generation, receiving her dancer name at the age of 15.