“My task is to keep the gods happy and mediate between them and the people.”

This brand new miko (shrine maiden) is only 18 years old, and she has started learning the sacred Kagura dance. 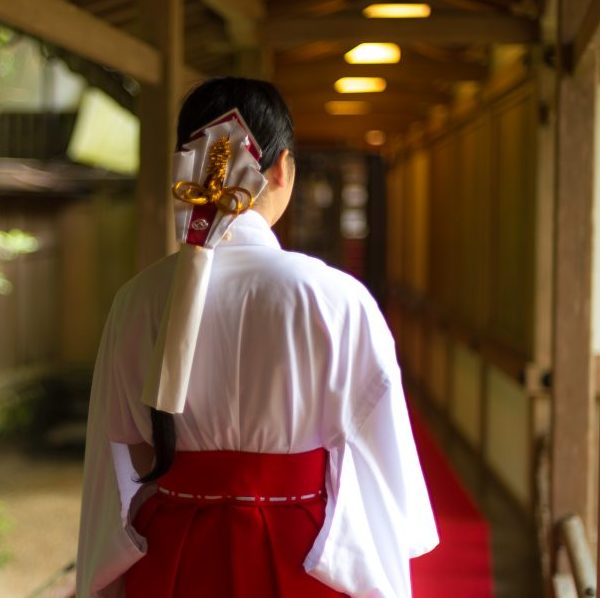 The job of the miko, like a flower blossoming in the shrine, is to keep the gods happy

Like a prim and pure flower blossoming in the solemn shrine, the miko treats the gods with the greatest hospitality, and greets worshipers with a humble smile.

The miko’s job is to act as an intermediary between those worshipers and the gods. Among her many roles, the most important is to perform the sacred Kagura dance in dedication to the gods.

She provides hospitality through worship and through the performance of the Kagura dance. This is done to keep the gods happy and help them exercise their divine spirit. The dance itself is an act of prayer.

In addition to performing the Kagura dance regularly at numerous sacred ceremonies and festivals, another important role of the miko is to provide charms, talismans, and fortune slips to the worshipers at the shrine’s shop. She receives the wishes of the worshipers and acts as an intermediary with the gods.

Being a miko means not just being a pretty girl

Historically, only pure women could become miko. Today, the miko at the Omiwa Shrine are comprised of young unmarried women between the ages of 18 and 28.

We visited the Omiwa Shrine for our interview in mid-June, and met with a brand new 18-year-old miko who had joined the shrine on March 10 after graduating from high school. She was right in the middle of her training as a new miko.

The Omiwa Shrine is one of the oldest shrines in Japan. The training begins with studying its profound history and learning about the many gods, and then practicing the sacred Kagura dance. As someone close to the gods, the miko must have a proper mindset and maintain an air of dignity. Being a miko means not just being a pretty girl.

There are five different types of sacred Kagura dances performed for dedication at the Omiwa Shrine for each of the various different festivals. Miko trainees start with Urayasu no Mai, one of the leading Kagura dances. With a fan of cypress in hand and the shaking of bells, this miko made her Kagura dance debut for a prayer ceremony in mid-April after much practice.

With an innocent smile, she explains, “At first I made many mistakes, but recently I receive compliments that I’ve come a long way.”

The miko greets with a beautiful dance and smile

“I once performed the Kagura dance at a local festival when I was in the 6th grade.” She explains that the beautiful child-sized Kagura costume and the joy of dancing she experienced are the reasons she became a miko.

Today she shares that joy with the gods and makes efforts each day, determined to dance more beautifully and joyfully.

She will soon be allowed to dance not only in prayer ceremonies, but for wedding ceremonies as well. Her task now is to learn the remaining four types of Kagura dances by July. “A Kagura dance teacher will be coming from Tokyo, so I have to work hard!” she says with determination.

She seeks to learn all of the dance forms, so that she can dance for major festivals. “I want to treat the worshippers here with care and always greet them with a beautiful smile.”

Numerous festivals are held at the Omiwa Shrine throughout the year where the sacred Kagura dances of the miko may be seen.