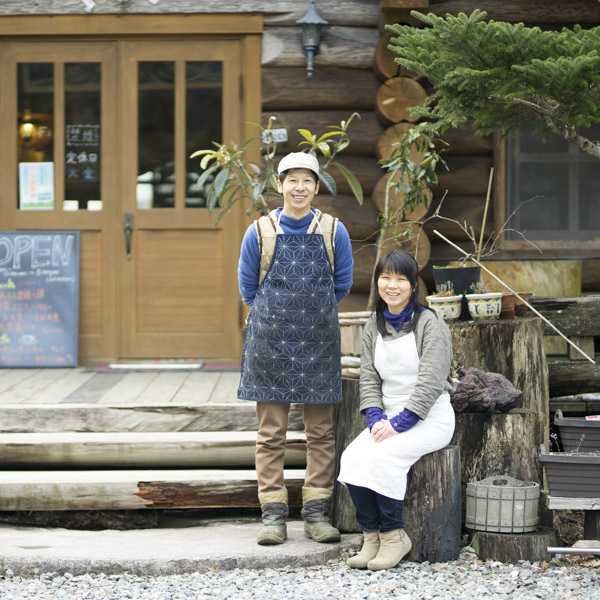 A place where people are drawn to

The sandbanks of the river that make up the Tsubonouchi area are considered to be highly sacred. The Tenkawa Dai-Benzaiten-sha Shrine is at the heart of the region. The shrine is known for housing the goddess of the performing arts and for housing the power to reverse one’s misfortunes.

In fact, the shrine is so sacred that legends say that only the “chosen” are allowed to pray there. According to the legends, if the gods deem you unworthy or not ready,  events will unfold in order to prevent you from visiting the shrine. Cafe “Oh! Tree”, which is managed by Yamamoto Shinya, is located near such a sacred place.

Yamamoto, who had previously lived in Kyoto and Australia, had struggled as a chef in the past. Currently, he lives a content life with an organic mindset that puts emphasis on an environment where natural ingredients can prosper.

Yamamoto, who was introduced to Tenkawa village by a friend, views his participation in the Tenkawa Dai-Benzaiten-sha festival as the turning point of his life. Speaking with the utmost confidence, Yamamoto declared that “the decision to live here and open a cafe was completely natural”.

Mr. Yamamoto may be a chef, but cooking is not the only thing that he does. When asked what his daily routine is like, he replied “today is wood cutting”. As it turns out, all the wood that is used as fuel for his store’s stoves is prepared by himself. From splitting to drying, Yamamoto does it all. Even the harsh cold of winter does not prevent him from being absorbed in his work.

Another of his life work is the cultivation of organic ingredients. He was inspired by his friend who had told him that it is key to pursue “green” as it is the natural order of things. Whether it’s local soybeans, herbs, or shiitake mushrooms, for Yamamoto organic is the answer. Mr Yamamoto’s hobbies range from making miso, umeboshi, and syrup. As might be expected, everything is done by himself, including the fermentation and processing.

However, Yamamoto believes that the most important ingredients are the ones that can only be found in Tenkawa village: that is fresh water, clean air, and sunlight. He lives a simple lifestyle that reflects itself in his cooking. “I believe that the simple dishes taste the best. I strive to be as simplistic as I can possibly be.” said Mr Yamamoto.

Based on washoku (Japanese cuisine), the cafe menu is not only healthy, but delicious as well. Made from natural ingredients, this Japanese cuisine will resonate a sense of satisfaction deep within your chest.

The menu includes the Fried Chicken Meal (1,000 yen): a dish covered in homemade black soybean miso. Another item on the menu is the Pork Back Ribs Meal which is plentiful with fresh vegetables. There is also the Coconut Curry with fried vegetables. Each item on the menu will invigorate life into your body.

The natural flow of things

From moving to Tenkawa, to opening a cafe, Yamamoto had made some interesting decisions. However, according to Mr Yamamoto, none of these decisions were up to him.

“I have always been the type of person who would follow his instincts. When I came to Tenkawa village I realized that my instincts were correct. I truly believe that Benzaiten (goddess of the performing arts) has blessed this land. I always attend the monthly festival held at the shrine.”

It’s been 5 years since Yamamoto opened his cafe. Recently, more and more people who are attracted to the village or to its shrine have opened shop similarly to what Mr Yamamoto did 5 years ago. Once in a while, it may be wise for us all to relax and follow our intuition. If you’re experiencing a period of change in your life, why not to listen to the hints that come from inside?