Living in Nara: how it became my Japanese home

Discovering the city through the eyes of an italian girl

In the summer of my 24, I was a graduate student in design determined in finding an internship in that far away island I have always dreamed about. As fate unfolded, my destination was set in Nara.

I opened Google Maps and browsed the map of Japan: “Oh, Nara is here! It looks close to Kyoto and Osaka”.

Back then, I merely knew that this Japanese city was famous for the presence of a community of deer that lives tamely along with people. As I was packing my stuff and setting everything up for the upcoming journey, I couldn’t even imagine how this experience would have affected my life.

Does love at first sight exist? Welcome to Nara.

The few hours between my landing at the Kansai International Airport and the moment in which I met the first deer in Nara park, weren’t enough to let me understand what was going on. I took my first steps through the streets of a yet unknown city, unaware of the multitude of wonderful experiences that were awaiting me around the corner.

I discovered the amazing sightseeing spots of Nara with the excitement of an usual first-time visitor.

For the first time, the majesty of the Todaiji Temple left me wide-mouthed. I walked the Higashimuki shopping arcade and admired the tall pagoda of the Kofukuji Temple standing out in the sky of an August day. I quietly observed the evocative 19th-century houses of Nara-machi, the former commercial district. I traveled through the sacred forest surrounding the Kasuga Taisha Shrine and, in such an unbelievable summer heat, I took comfort in the shade of those impressive trees. Again, I laid my eyes on the outline of Mt. Wakakusa, glimpsing the first evening star.

Perhaps, I couldn’t realize to be finally in Japan yet, but I was sure enough of this: I fell in love with Nara at first sight.

Besides the beauty of the city itself, I surrendered to the incredible warm hospitality of Nara’s people.

A lively, friendly and cheerful local community welcomed me with such an unconditional love. Here, my new friends helped me to take the first steps in the Japanese culture. While living in the very first capital of Japan, I learnt about traditions, behaviors and habits as a kid would do in school. As I got more experience, this city became my Japanese hometown, and its people my Japanese family.

For a month, I worked as an intern in a local company involved in the promotion of the city. Even if it was short, it was enough to enjoy everybody’s kindness and admire their commitment to such an interesting work. That was the moment I decided that, after my graduation, I would have come back there for a real job.

Working and living in Nara, an everlasting charm.

After my working visa was issued, I was ready to return to Nara for a three months period of work. My friends, colleagues and familiar places were there, waiting for me to come back.

I was assigned to the design department involved in the tourism business. The Japanese term to define overseas tourists visiting Japan is called “inbound business”. Thanks to this work, I could learn a lot about the historic importance of Nara and I discovered an endless number of fascinating places around the whole prefecture.

While doing my job, I could live unique experiences. On my way to work, I dodged the hordes of tourists gathering around the deer to feed them with the shika-senbei. I took pictures in the peculiar streets of Nara-machi, glimpsing old ladies wearing kimonos while being busy in transporting trays of green tea muffins. I chilled out eating my lunch sitting on the lawn above the Sarusawa pond, facing the 1300 years old Kofukuji Temple.

The same fascinating places that I visited as a tourist at first, were now perceived under a different perspective: they gradually became part of my daily existence.
In particular, I was making a video-shooting at the Nara Hotel, a beautiful example of the mixed-style architecture of the Taisho Period. In the lounge, while I was observing the old photograph of Albert Einsten playing the same piano I was standing in front of, I found myself thinking “what a fulfilling work I am doing!”.

After a total of six months spent in Nara, my Japanese life was likewise enjoyable. I avoided much stress by riding not very crowded trains, really different from the ones I was used to when I lived in Tokyo. Whenever I wished to, I could enjoy strolls in the peaceful nature of Nara park, discovering secret peaceful spots each time. The smiles of the staff in small local stores became quickly familiar and made shopping and dining a pleasure. More than once, I climbed up the stairs to the Nigatsudo Hall to admire the night view of Nara, surrounded by a sacred silence

I enjoyed each day I spent in such a place saturated with history, quietly awaiting for people to discover its beauty. Whenever I wanted to, I could reach larger metropolitans area like Kyoto or Osaka in just a 30-40 minutes train ride.

Moreover, learning the history of Nara made me realize that I was living in the very cradle of Japanese culture. I just couldn’t get enough of its charm.

Leaving our traces behind, towards tomorrow.

At the time of writing, I am preparing to be back to my home country, Italy.

My life in Nara was, without any doubt, a fulfilling one. Everything I learnt, thanks to my job and to such an active community of people, represents a treasure I will always cherish. During the months spent here, I welcomed many persons and guided them through this city that, at this point, I feel part of. I am glad now I can share the same proud my friends felt when they first introduced me here.

Nowadays Nara is popular among tourists mainly for half-day trips from Kyoto or Osaka, but I really hope someday soon its treasures will be appreciated even more. Identifying Nara just with Nara park, its deer and the Todaiji Temple is extremely diminishing. There so much awaiting to be discovered in the whole prefecture.

Before coming to Japan I mistakenly idealized the life in bigger cities, but I quickly changed my mind after two months spent in Tokyo. I hope more and more foreigners will consider Nara as an ideal destination to move in, because I found living here very people-oriented. In our fast-paced life, after all, we often forget how beautiful is to look above and be able to see the stars. 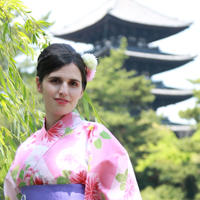 I am an italian designer in love with Japanese culture and Studio Ghibli's movies. In 2015, I moved to Nara for my academic internship. Since then, this city became my second home. After I graduated at ISIA Firenze in 2016, I came back to my beloved Nara to enjoy a three months working experience.