How the site of an old gas station became a tourist attraction: A coffee shop that enjoys affectionate bonds with its local community

A “coffee station” with a delightfully quirky look, located in an old-time neighborhood 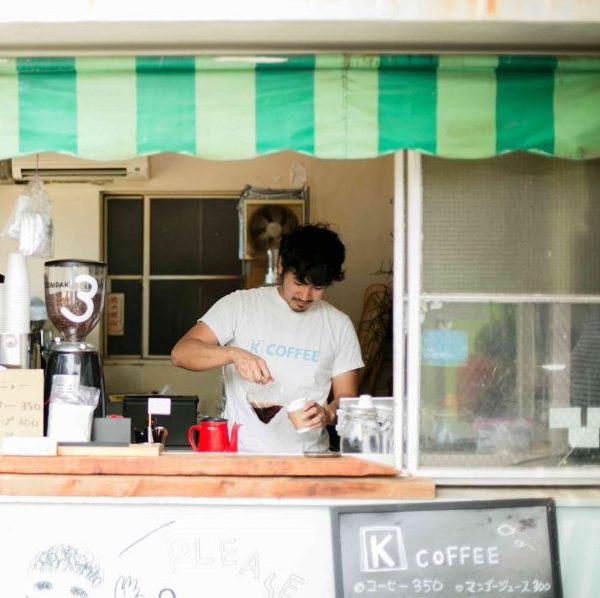 A coffee shop that was started up based on its ties with local people, and has since acquired a huge following

Around 10 minutes on foot from Kintetsu-Koriyama Station stands a coffee shop serving home-roasted coffee within a truly unique setup. This coffee shop, K COFFEE, occupies the site of a former gas station, and features a repurposed telephone box which has been turned into a fish tank, known as the “goldfish phone box.”

The cafe has acquired a landmark status within Yamatokoriyama, the “town of goldfish,” and is visited by numerous tourists from outside the prefecture, many of whom come during its non-business hours simply to look at the building.

The story behind the birth of the famous “goldfish phone box,” now a popular sightseeing spot!

K COFFEE opened in February 2014. It grew originally out of “Art Festival Hanarart”, an art festival which was held in Yamatokoriyama in 2013 with the aim of using art to bring vitality to the region. During the festival, Mr. Kazuya Mori opened up a coffee shop at the old gas station where the current shop now stands.

The “goldfish phone box” was set up as one of the artworks displayed at the festival. After the art festival was over, there were plans to clear away both the coffee shop and the phone box; however, Mr. Mori had taken a liking to the place, and started direct negotiations to rent the spot. Most people living in the area apparently were of the opinion “a coffee shop will never work in this location”; however, Mr. Mori was determined to take up the challenge. He went ahead with the plan, and K COFFEE was inaugurated as an official business.

Balancing work and childrearing in Koriyama, a town that brings goldfish and people together

When the coffee shop first opened, some people from the nearby high street suggested repainting the premises, as the spot had a run-down look about it. Nevertheless, “On reflection, I think that the feel of the store is actually just right,” says Mr. Mori. “There are lots of traditional Japanese-style buildings standing in Koriyama. This place, however, is ‘old’ in a different way. It creates an interesting-looking neighborhood, and I’m glad we left it as it is.”

Visitors were scarce at first. “At that time, I never imagined that we would ultimately attract the levels of attention we are getting now,” says Mr. Mori. Upon first moving to Koriyama, Mr. Mori knew nobody in the area. However, when he took part in local community gatherings, he mentioned to other people there that he wanted to start serving coffee in the local area, and this became a starting point for the close bonds that have developed between local people, the K COFFEE site and the “goldfish phone box.” “I am immensely grateful for all this,” says Mr. Mori, describing the unusual relationship that has developed here.

The Mori family lived in Osaka until their children were born. They decided to live in Yamatokoriyama, Mrs. Mori’s hometown, at about the time when Mrs. Mori decided to return to work after having children. “In our family, my wife is the main breadwinner, while I play the more active role in bringing up the children.” For Mr. Mori, who looks after the children while running the coffee shop, “the job I’m doing now is the perfect environment for bringing up kids.”

Another positive feature of this working environment for Mori is that the location of K COFFEE allows him to “watch over the local neighborhood kids as well as my own, as I can see them playing tag in the hills behind the shrine after they finish school, or playing in the nearby park.” There is no doubt that this spot will continue to be much loved as a soothing place for people to come together and enjoy a cup of coffee as they watch the fish swimming in the “phone box.”