A skill dating back 1,400 years—now being taken forward into the future The love and passion that lie behind the traditions of miyadaiku carpentry

The beauty of Horyuji Temple as described by Mitsuo Ogawa, the sole pupil of Tsunekazu Nishioka who was a legendary practitioner of the traditional art of miyadaiku 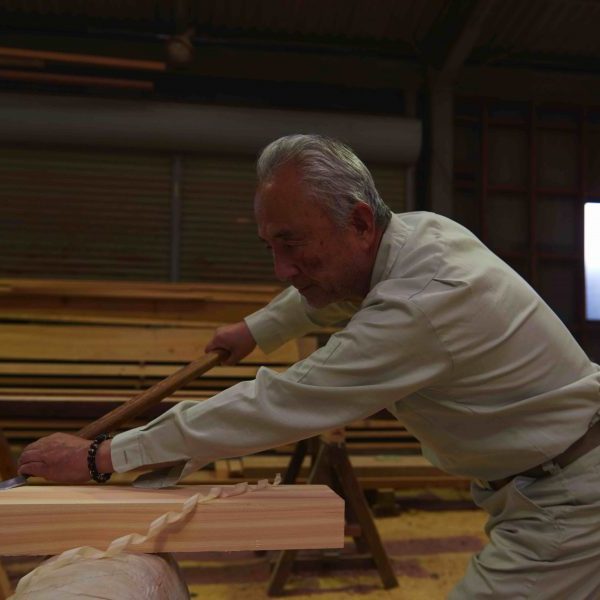 The world of miyadaiku: “a skill which cannot be ‘taught’ as such, and which must be learned by the apprentice themselves applying his own powers of thought”

1934 saw the start of a project which occurs only once every few hundred years: the commencement of large-scale renovation work at Horyuji Temple, a lengthy process which went on for around 50 years. The work of repairing the main hall, Hondo, and the five-story pagoda at Horyuji Temple was conducted under the supervision of Mitsuo Ogawa, the sole pupil of legendary master carpenter Tsunekazu Nishioka. To this day, Ogawa has continued to work on repairing, rebuilding and reconstructing temples in various locations across Japan.

In 1977, Ogawa founded Ikaruga Kosha, a temple carpenters’ school, based on a unique apprenticeship system in which novices learned traditional carpentry techniques under master craftsmen. To this day, he has successfully mentored numerous younger craftsmen, who eat and live together within their communal accommodation.

Miyadaiku means the traditional carpentry techniques used to build and refurbish shrines and temples. For most trades in the world at large, “the usual pattern is for the skills and techniques to be passed down from teacher to trainee through verbal instructions,” says Ogawa. However, he explains that when he was learning miyadaiku skills from master carpenter Tsunekazu Nishioka, “he never actually ‘taught’ me as such.” Instead, Ogawa learned the skills by watching the master at work again and again, gradually absorbing the techniques through a kind of osmosis.

Even when it comes to the management of the cutting tools used in miyadaiku, the master carpenter never explains the methods specifically; instead, the apprentice gradually learns how to sharpen and store the blades and discovers the reasons behind the methods through a process of self-reflection as he spends time in the master’s company.

“Our miyadaiku teaching style is about training the hands themselves to remember the techniques through the process of continued practice, rather than relying on verbal explanations,” writes Ogawa in his work, Ki no inochi, ki no kokoro (The life of wood—the heart of wood).

“It’s incredible to think that this is a building still standing from 1,400 years ago.” This ancient history is what makes Horyuji Temple so special

“Some say that Horyuji Temple was built using techniques that were learned from people who came over from China and Korea. Certainly, the pillars that are built on the stone and the tiles used for shingling the roof most likely draw upon techniques that came from outside Japan. However, the building we see at Horyuji Temple is actually quite different from those found around China.

Chinese buildings tend to feature relatively short eaves, perhaps because there is less rain in China. Conversely, Horyuji Temple’s buildings feature higher platforms to keep the structures away from damp, and longer eaves to take rain away from the buildings. It is likely that this style of architecture was adapted to suit the Japanese climate, with its higher levels of precipitation and humidity.

This kind of adaptation is where the genius of the Japanese can be seen,” says Ogawa, describing how Horyuji Temple was built. The respect Ogawa feels for his forbears and his pride in carrying out the work of miyadaiku is clearly evident in every word he speaks. Does being a practitioner of miyadaiku bring special enjoyment to the contemplation of Horyuji Temple?

“It is surprising that such carpentry who had the skill to build these temples existed in these ancient times, when there were not enough tools. Still standing here today because it is true carpentry. I want people not just to look at the temple as it is, but to think about and experience its 1,400-year history.”

Looking at the temple and thinking about the people who built it—transporting the wood, joining it together and building the structure—is another charm of Horyuji Temple.

On the second floor of the Horyuji i Center, the information office located in the visitors’ parking lot of Horyuji Temple, information panels (including English explanatory text) and actual tools used at the time Horyuji Temple was constructed are on display, letting visitors see how the five-story pagoda was built.

Continuing to learn from the magnificent skills bequeathed by previous generations of craftsmen, and from the mindset they developed towards their craft

It has now been 40 years since Ikaruga Kosha was established. Over that period, more than 100 apprentices have shared meals and accommodation here; currently, 30 apprentices are building up their expertise through training day by day, aiming to learn these ancient skills.

At Ikaruga Kosha, “we use mechanical tools as little as possible, aiming to carry out most work with the human hand,” says Ogawa. The reason for this is set out in Ogawa’s work, Ki no inochi, ki no kokoro.

“When craftsmanship starts to become centered on machines, it becomes impossible to use those wood varieties that machines have difficulty handling. This will ultimately destroy the craftsman’s skill of selecting the best wood to suit the building he wants to create, and of creating tools that best suit the wood. We are not just creating buildings here; we are also developing human minds.”

“Looking at Horyuji Temple, you can see how magnificent the carpentry is. Everything that we are doing here is about learning from these buildings,” says Ogawa. These special skills, which can only be learned via the master-apprentice relationship, and the love and passion for craftsmanship which insists on perfection in every detail, are now being passed on to the next generation of miyadaiku carpenters.