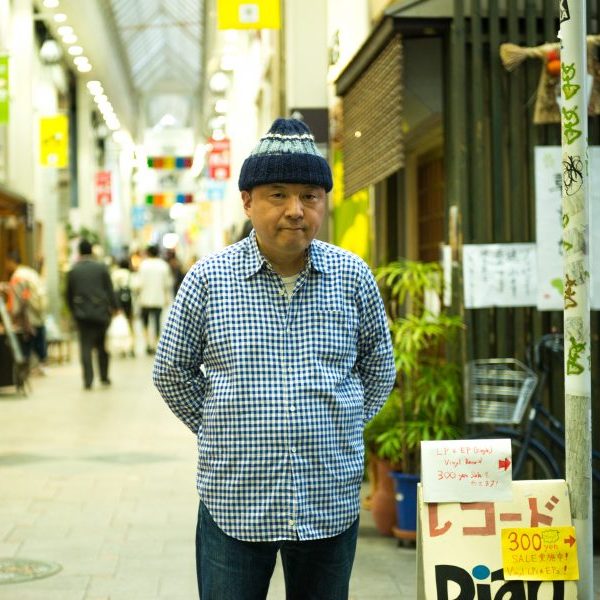 Such enthusiastic comments are plastered all over the tightly stacked CD’s and records that can be found in this intriguing little music shop in Nara. In fact, Mr. Matsuda has gained quite a reputation for his passionate and lively comments. He has appeared on TV interviews and in some magazines.

Due to his deep love for music, he has been asked by magazine companies to conduct interviews with foreign musicians. Keigo Oyamada a.k.a CORNELIUS, a Japanese musician who is respected in both the US and Europe gave a shout out to Mr. Matsuda calling his store a “CRAZY COOL record shop in Nara!”.

Mr. Matsuda’s store has also been called by a certain song writer as a “miracle record shop that lives through the music recession”.

Matsuda Taro, the shopkeeper of Django, is drawing attention with his comments on Twitter. Every day he sends passionate tweets such as “This is a RARE gem!!”, “DON’T MISS IT AT ANY COST!!!” and “MUST HAVE for longtime fans!!!!”. For Mr. Matsuda, it is hard for him to contain his excitement.

However, despite Mr. Matsuda’s invigorating personality, the current reality of the music industry is not so upbeat. CD’s just aren’t selling. There are days when not a single customer visits and even the street in front of the shop is empty. Are CD’s disappearing? In these desperate times, Mr. Matsuda aims to “connect with people who love music” by Twitter.

“Django is often called the miracle shop. But, the current state of the music industry is pretty bad. With that said, I try to call out and reach as many people as I can from my store. I wish to connect the music I love and the people.”

Mr. Matsuda, who speaks with a serious look in his eyes, became independent in 1987, a time when CD records were sold globally.  Without paying any attention to current trends, he continued to introduce the CDs of his favorite artists and the music that he loves. His attitude has not changed.

Even now his record shop is considered “the oldest selection shop” still around. In Japan, and around the world, record shops are disappearing at an alarming pace. It is safe to say that Django is indeed a “miracle record shop”.

Nara is known by many for its long and ancient history. With its many sightseeing spots, the city receives many tourists from all over the world. Thanks to the shop’s location, Django receives 1-2 tourists from overseas a week even if the day isn’t busy.

Many of these guests from abroad enjoy J-Pop on YouTube. Some come in the store looking for records of the Japanese rock band ‘Happy Ending’, whose music gained international interest after being used in Sophia Coppola’s film ‘Lost in Translation’.

According to Mr. Matsuda, some customers from overseas that collect Obi (a piece of paper wrapped around the spine of Japanese CDs, DVDs, Movies, and books sometimes referred to as a “spine card”) which are only attached to albums released in Japan. “There was one customer who came to the store looking for a Japanese release of The Beatles with an Obi. There was another customer who was looking for a record jacket of a rock band written in kanji like ‘Yokohama Ginbae’ for example.”

Mr. Matsuda recalls that the other day a young couple from France came into the store and bought a lot of the Japanese edition CDs released by numerous French artists. The reason was because they are not available in France. Some CDs are not produced in France anymore, while others were released exclusively in Japan.

“I’m not sure why some albums are released in Japan and not in their home countries. I guess Japanese people really like CDs” said Mr. Matsuda. “Even with the current state of the music industry, Japan is the country where CDs are sold most in the world. Japan is also the country with the most CD shops left.”

“I guess it is because there are many record collectors in Japan. Actually, the country where records are being gathered from all over the world is also Japan. It appears that there is a market for records in Japan right now.

Perhaps Mr. Matsuda is correct. We sometimes hear stories of famous musicians coming to Japan and going on shopping sprees at Japanese record shops. Django may be something special not just in Japan, but also the world.

Django is truly a gem of a shop. CDs and records, both Western and Japanese fill the corners of the store. The different music genres that are available in the store is impressive. Some of the music in the shop is old, others are new. There is a mix of both. However, there is one form of consistency: the store only holds music that Mr. Matsuda really loves.

During the interview, a particular album by Jazzanova, a club jazz group from Germany caught my eye. The album is called ‘In Between’ and originally released in 2002. The album’s cover art was interesting to say the least. Their use of 3D illusions on the cover art and package displayed the playful nature of the artist.

“It’s really cool right? If that album were a digital copy, it would not be as much fun.” Mr. Matsuda pointed out.

If you plan on visiting the shop, make sure to talk to Mr. Matsuda. If you were to ask Mr. Matsuda what he would recommend, he will most likely start of by asking you what you are interested in and what you want to hear. With his knowledge and love for music, he will undoubtedly help you find what you are looking for.

Django has opened the door of the music world for many of its visitors. It has helped form their view of music. The shop indeed is truly a living legend. Come to Django and a new encounter with music will welcome you.