The story of the 8th generation potter restoring a climbing kiln, continuing more than 200 years of pottery 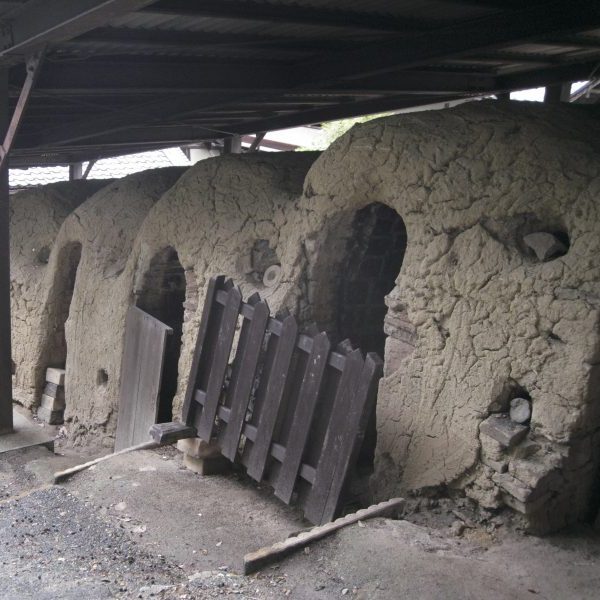 Nara’s traditional pottery style is Akahada ware (Akahada-yaki). Akahada ware has a history from the latter half of the 16th century continuing up to the present, and is characterized by having simple pictures called Nara-e painted on the smooth pottery. It is beloved by many tea ceremony practitioners, and is now popular among foreign tourists.

Noriko-san is a woman who took the name “8th Gyozo Furuse” from her father when he passed away in 2010. She has undertaken the task of renovating a kiln which had not been in operation for more than 40 years.

Deciding to disassemble and repair a climbing kiln with historic value

Gyozo Furuse contains three climbing kilns of large, medium, and small sizes. Of those two kilns, the large one built at the end of the Edo period (1800s) and the medium kiln built in 1951, as well as the former work place and exhibition place, are listed in Japan as Registered Tangible Cultural Properties.

As climbing kilns have become smaller with modernization, one can see the historic transition before one’s eyes, and now the small climbing kiln is the one being used. It has been more than 40 years since the large and medium climbing kilns that require repair have stopped being used at a high firing temperature of about 1,300℃.

When her mother urged her by saying, “You can’t just watch them deteriorate,” the 8th generation potter began to look for a furnace builder to oversee the disassembly and repair. She met Hosokawa Reizo, who had more than 60 years of experience building furnaces, who said, “This kiln will work again.” Then he started the unprecedented major repair job.

The disassembly and repair of the climbing kilns, Registered Tangible Cultural Properties, are being conducted by using ancient materials of brick and earthen walls as much as possible.

The 8th generation potter said, “There must be real charm that can only be seen in pottery made in climbing kilns. Akahada ware is pottery that has been fostered by the people of Nara, so I want to share the sense of accomplishment and joy with everyone.Then I want to make a lot of good pottery in the kilns when they are easy to use, and I want to spread Akahada ware throughout the world.”

Nara can boast of its Akahada ware to the world. They aim to complete the disassembly and repair by 2018 to 2019, but they still do not know what might happen. They are patiently and steadily moving toward the day when they will be able to fire the kilns up once again.